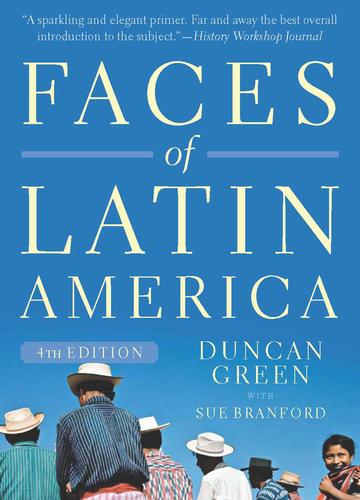 Already purchased in store?
or

Faces of Latin America has sold more than 50,000 copies since it first appeared in 1991, and is widely considered to be the best available introduction in English to the economies, politics, demography, social structures, environment and cultures of Latin America. Duncan Green and Sue Branford take the reader beyond the conventional media’s fixation on the drug trade, corrupt politicians and military leaders, death squads, and guerrilla movements to celebrate the vibrant history and culture of Latin America’s people. Faces of Latin America examines some of the key forces—from conquest and the growth of the commodity trade, military rule, land distribution, industrialization, and migration to civil wars and revolutions, the debt crisis, neoliberalism, and NAFTA—shaping the region’s political and social history.


Green also analyzes the response to these transformations—the rise of freedom fighters and populists, guerrilla wars and grassroots social movements, union organizing and trade movements, liberation theology, and the women’s movement, sustainable development and the fight for the rainforest, popular culture and the mass media—providing a fascinating and unparalleled portrait of the continent.


This new edition is thoroughly updated and covers recent developments in Latin America such as the growing costs of export agriculture, the rise of Brazilian manufacturing, connections between the war on drugs and the war on terror, the social costs of neoliberalism, the Argentinian default, the search for new economic models in Venezuela and elsewhere, the decline in direct U.S. military intervention in the region, growing urbanization, urban poverty and casual employment, outmigration and the importance of family remittances from abroad, rampant environmental destruction, the struggles of indigenous movements, and more.